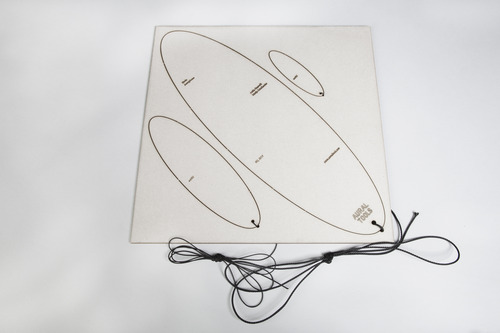 Freie Aerophone is based on Matija Schellander’s solo pieces for double bass, “the drill” and “matija schellander”, that make extensive use of indistinct low pitches resonating a space, and sound projections by circular movement of the performer with the instrument.

In the Hornbostel-Sachs musical instrument classification (Zeitschrift für Ethnologie, 1914), the freie aerophone  is an instrument in which the vibrating air is not contained within the instrument itself, for example a siren or a bullroarer.
The bullroarer, usually consists of a wooden slat that produces a roaring sound when swung around one’s head on the end of a string or rope. It has been used in religious ceremonies and as a toy since the Paleolithic period, with examples found in Ukraine dating from 17,000 BC. It has been found also in Europe, Asia, the Indian sub-continent, Africa, the Americas, and Australia.
The reason for its widespread use might come from the fact that bullroarers are unique in the way such a small, portable and simple tool can produce such deep, low sounds.
“I first met Matija when I organized for him a concert at my small studio in Milano. There he played an amazing solo set for double bass. I was impressed by the way he literally made the room resonate with his huge instrument, generating indistinct, penetrating, deep bass tones. Everyone was hypnotized by a long piece he played while turning with the instrument in circles for 15 minutes. (Everybody thought he would have fainted…) By moving the source of the sound, he interacted with the room’s acoustics in a very nice and complex way.”(Attila Faravelli)

After some thinking we came up with the idea of releasing a bullroarer, being, somehow, a tool that produces sound in a very similar way to the one Matija adopts when he plays double bass.
After many tests and prototypes, we chose to build it using recycled heavy cardboard instead of wood. We found it to be safer for home use, without compromising the sound. You might agree with our choice after having looked at this silly (but not so unrealistic) video.
Instructions:
1. By carefully pushing them out, extract the 3 oval-shaped bullroarers.
2. With a tissue, clean off the black dust from the laser cut process.
3. Lightly smooth out the edges of the ovals with the provided sandpaper. The bullroarers will sound anyway – but we find them to play better the more aerodynamic they are, in the sense that they will sound more only in the low-frequency spectrum.

4. Choose one of the 3 bullroarers and, holding its cord tightly in one hand, give the bullroarer a slight twist.

5. Swing the bullroarer in a large circle around the head or one one side. To produce sound, the bullroarer must be turning on its axis while whirling.

Different sounds can be achieved by the size of the bullroarer, the length of cord used and the speed at which it is swung.
–
With support from bmukk Österreich